News From Around The Blogosphere 1.4.09

1. Researchers conclude that G-spot is a myth –

The scientists at King’s College London who carried out the study claim there is no evidence for the existence of the G-spot — supposedly a cluster of internal nerve endings — outside the imagination of women influenced by magazines and sex therapists. They reached their conclusions after a survey of more than 1,800 British women.

Bad or non-existent sex ed also fails to teach people to protect themselves against STDs. One student interviewed recalls a professor pinning the failure rate of condom usage in protecting against HIV/AIDS at 15-20% (it’s actually close to zero). Unsurprisingly, women are at particular risk for the disease, which spreads primarily through unprotected heterosexual sex, due to a severe lack of information on the subject. And, oh abstinence-until-m

3. Creationists given potentially unparalleled power over children’s textbooks – Texas and California are the two states that largely determine public school textbooks for the rest of the country. But now that liberal California can’t afford to buy new textbooks until 2014, Don McLeroy and his ultraconservative gang may have all the power. We’re going to need Eugenie Scott and the National Center for Science Education more than ever now.

4. British skeptics launch ’10:23 Campaign’ against homeopathy – The name comes from the Avogadro Constant, the scientific principle in which homeopathy would violate…if it were true. I also love their slogan:  “Homeopathy: There’s Nothing In It.”

5. Black Atheist is cast member on MTV’s ‘Real World’ – Apparently, one of the cast members of the latest season of the Real World, Ty Ruff, is a black atheist. I only mention his skin color because there doesn’t tend to be many black atheists.

According to  his bio:

… Despite growing up in the church, he is anti-religion and thinks believing in God is a crutch…

6. Atheist Foundation of Australia put up bus ad in Tasmania – The slogan is, “Atheism: Celebrate Reason!” I like it. 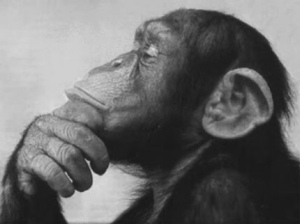 A new study of chimpanzees living in the wild adds to evidence that our closest primate relatives have cultural differences, too. The study, reported online on October 22nd in Current Biology, shows that neighboring chimpanzee populations in Uganda use different tools to solve a novel problem: extracting honey trapped within a fallen log.

“The most reasonable explanation for this difference in tool use was that chimpanzees resorted to preexisting cultural knowledge in trying to solve the novel task,” said Klaus Zuberbühler of the University of St Andrews in Scotland. “Culture, in other words, helped them in dealing with a novel problem.”

8. Lifeless prions evolve or another bad day to be a creationist –

Scientists from The Scripps Research Institute have determined for the first time that prions, bits of infectious protein devoid of DNA or RNA that can cause fatal neurodegenerative disease, are capable of Darwinian evolution.

The study from Scripps Florida in Jupiter shows that prions can develop large numbers of mutations at the protein level and, through natural selection, these mutations can eventually bring about such evolutionary adaptations as drug resistance, a phenomenon previously known to occur only in bacteria and viruses. These breakthrough findings also suggest that the normal prion protein — which occurs naturally in human cells — may prove to be a more effective therapeutic target than its abnormal toxic relation.

This entry was posted on Tuesday, January 5th, 2010 at 1:04 am and is filed under Alternative Medicine, atheism, Birds & Monkeys (or apes), Education, Entertainment, Evolution, Intelligent Design/Creationism, Myths, News From Around The Blogosphere, religion, Sex. You can follow any responses to this entry through the RSS 2.0 feed. You can leave a response, or trackback from your own site.

One Response to News From Around The Blogosphere 1.4.09