News From Around The Blogosphere 3.10.11

1. Mind-controlling fungus creates army of zombie ants – If the mimic octopus is the most interesting fauna I’ve ever heard of, then this newfound fungus species Ophiocordyceps camponoti-balzani has to be the most interesting flora I’ve ever heard of. It literally takes over the ant’s mind and forces the ant to find “a location ideal for the fungi to grow and spread their spores.” 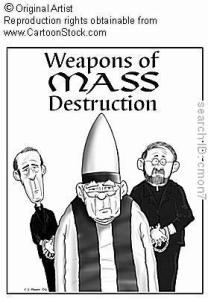 2. 21 Philadelphia Catholic priests suspended on suspicion of child abuse – Several have already been indicted on charges of rape and assault on minors. But what’s most shocking is how callous the church is treating the scandal.

This entry was posted on Friday, March 11th, 2011 at 1:20 am and is filed under General Science, News From Around The Blogosphere, religion, Sex, What's The Harm. You can follow any responses to this entry through the RSS 2.0 feed. You can leave a response, or trackback from your own site.

One Response to News From Around The Blogosphere 3.10.11