“You have a degree in baloney!” 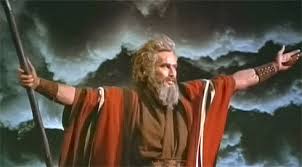 “You have a degree in baloney!” This was an hilarious response from a character on Futurama to someone claiming to have a degree in homeopathy but it seems somewhat appropriate as a response to Carl Drews, the lead author on a study that attempts to explain scientifically how Moses could have appeared to have parted the Red Sea.

What I guess can be said to be the “positive” thing about this study is that at least it’s trying to demonstrate that an alleged “miracle” could be legitimately explained naturally. It also gives me hope that Drews may next scientifically explain how Luke Skywalker was able to successfully hit a tiny exhaust port without a targeting computer. Of course the problem I’m getting at here is that every facet of the Moses story was almost certainly made up. It’s a fucking fairytale that doesn’t require naturalistic explanations for its magical events any more than we need to scientifically explain Harry Potter. And given Drews is himself a Christian, it doesn’t give me much hope that science-izing the Biblical accounts will change many people’s minds.