News From Around The Blogosphere 5.11.11

1. Indians pissed that Hindu goddess appears on skimpy swimsuit – And while I do enjoy me a good blasphemy story, the only real reason I’m posting this is for an excuse to post the pictures of the sexy model in the swimsuit. Now I know what their gods need with all those hands.

2. T-Minus ten shopping days till the Rapture! – Richard Dawkins has perhaps given the best public response in the news media yet to the completely idiotic Harold Camping prediction that the Rapture will occur on May 21, chastising the Washington Post within its own pages for even having the audacity to report on it as if it were real news. And perhaps on a related note, May is Zombie Awareness Month!

3. Simpsons’ actress Nancy Cartwright brings Scientology program to Springfield schools – Cartwright is the voice of Bart Simpson. She’s also a crazy as fuck Scientologist who’s now pushing a learning program based on the unsupported ideas of non-educator L. Ron Hubbard on the students of Springfield, Illinois. 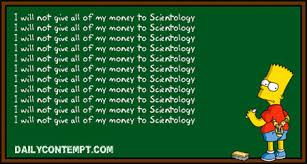 As many of you may know, Nancy Cartwright, who famously voices the character of Bart Simpson on The Simpsons has been a $cientologist pretty much since day one of the show’s twenty-season run. Today she’s a high-ranking member.

Well now a new leaked $cientology video intended to only be seen by other $cientologists (like the hilarious Tom Cruise video leaked earlier this year) has emerged promenantly featuring Ms. Cartwright as she delivers a call to arms for $cientologists, telling them, “This is the Crusade.” The video demands nothing short of trying to convert everyone in your neighborhood to $cientology.

Though there’s no inexplicable laughing fits, this video manages to be every bit as creapy, if not more so, than the infamous Tom Cruise video.

My response to Ms. Cartwright:  EAT MY SHORTS!

I’ve known that Nancy Cartwright was a high-level OT in $cientology for some time now but apparently she actually robocalls people in the Hollywood area about Scientology events, where she evidently performs the “audits”. She does these calls in the voice of Bart Simpson.

Because the video on the site linked above is no longer active due to a copyright violation, I’ll just present this video, which also addresses how Cartwright is an even bigger $cientologist than Tom Cruise:

She’s given $10 million to $cientology, more than Tom Cruise, Kristie Alley, John Travolta and Kelly Preston combined. I rather like this quote:

“It’s gonna be a blast, man! (Bart laugh)” before asking us to call and confirm our attendance. It’s as if we’d heard Bugs Bunny making a speech for Hamas (“Poisonally, Doc, I prefer jihad”).