News From Around The Blogosphere 7.30.11

1. Pay attention, American Atheists. THIS is how you win friends and influence people –
While American Atheists and NYC Atheists are looking to sue everyone in sight and battle it out against 9/11 first responders and their families, Chris McCoy did something very different. He launched a campaign to raise $50,000 for charity using GiveBack and recruited fellow atheists to help him. This is how you change people’s opinions about atheists, not by behaving like Scientology.

2. Lesbian couple saves 40 in Norwegian shooting – If “God” had his way, Hege Dalen and her partner, Toril Hansen would have been stoned to death long ago. But fortunately for 40 presumably mostly straight Norwegians, most Christians lack the courage of their convictions and never got around to obeying that particular command from their god.

3. The Richard Dawkins Award goes to Hitch! – Last year, a controversy began over the award going to Bill Maher because of Maher’s outspoken superstitious views about medical science. But I doubt many will object to this year’s winner, Christopher Hitchens, who last year was diagnosed with terminal Cancer. And yet, in spite of the Big C, Hitch has remained as active as ever in battling religious superstitions while showing enormous grace in the face of almost certain death. I can think of no one who better deserves the award.

I was sick last week and so I ended up skipping the NYC Skeptic’s monthly Drinking Skeptically. As it turns out though, I might have dodged a bullet. An editorial writer for the NY Observer (I know, I didn’t know that was a real newspaper either) apparently attended both Massimo Pigliucci’s monthly philosophy-themed meet-up, which I’ve never personally attended, and Drinking Skeptically. But the reason I say I dodged a bullet was that the final article he wrote suggests he had no real interest in fairly assessing skeptics and decided to add dramatic license…A LOT of dramatic license.

I know most of the people cited and quoted in the article. Many of them are personal friends of mine. And the descriptions of them here don’t resemble any of them. This can only be described as a hit piece, which may explain why every chance he got (as well as those that weren’t there at all), he attempted to invent a comparison between skeptic’s groups and religions, even comparing the image of a bunch of philosophy-enthusiasts sitting at a table together to The Last Supper. Cause it’s a group of people sitting at the same table eating! GET IT!

The vast majority of human interaction revolves around food, so I’m pretty sure many meetup groups involve a bunch of attendees sitting at a long table together. That the author thinks this attribute alone constitutes an appropriate comparison to religion suggests he understands as little about religion as he does his interview subjects.

This is just a pathetic piece of writing unbecoming of any serious publication, even buried in the Culture section. One of my friends who was shamelessly quote-mined in the piece says the author trapped them with leading questions. That same friend later reported that the article’s author, Jonathan Liu, emailed a sort of apology for how the piece turned out, claiming the final product ended up more “frivolous” than he wanted. According to my friend, Liu said all the “aggressive” and  “messianic” language along with the claim that Massimo Pigliucci was out to “forcibly convert” theists was just his way of innocently expressing that many skeptics are passionate about the cause. Suffice it to say, I find this explanation somewhat dubious.

1. Catholic Church tells hospital they should have let patient die – A pregnant woman who was almost certainly going to die came into St. Joseph’s Hospital and Medical Center. The doctors knew that in order to save the woman’s life, they’d have to abort the fetus. And it worked. But the Roman Catholic Diocese of Phoenix didn’t like that decision and so they essentially excommunicated the hospital from any Catholic affiliation. They actually punished a hospital for putting patient life first. Though I guess it’s not really a punishment since now the hospital administration can continue to act ethically without having to give the misguided and ignorant opinions of Catholic officials another thought.

And speaking of the Catholic Church…

2. WikiLeaks uncovers another possible Vatican scandal – The Vatican originally agreed in writing to take up observer status with the International Task Force on Holocaust Education, Remembrance, and Research, referred to as the ITF. Then, according to a U.S. diplomatic cable from WikiLeaks, they reneged on the agreement amid controversy over the role of the war-time pope.

She added that the deal “had fallen apart completely … due to Vatican back-pedaling,” according to the cable, which was published by the newspaper.

The message says this decision “may have been taken by the Vatican’s relatively inexperienced new deputy foreign minister (Ettore Balestrero), and if so, would not be the first time he has complicated Vatican foreign relations.”

However, it added: “The Vatican may also be pulling back due to concerns about ITF pressure to declassify records from the WWII-era pontificate of Pope Pius XII.

Yup, you can always count on the Vatican…for a good scandal.

3. Gallop poll suggests America is gradually moving towards accepting evolution – When it comes to accepting evolution, America is somewhat of an embarrassment to the rest of the world. In recent years, polls have shown that up to 47% of Americans are Young Earth Creationists. But a new poll suggests that number is now only 40%. Still not anything remotely to be proud of but it suggests that maybe our efforts to take on the creationists may be yielding positive results. 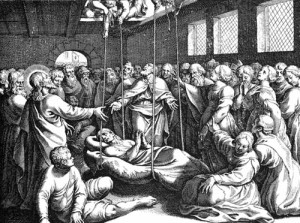 4. Sanjay Gupta embarrassingly uncritical of John of God – Unfortunately, CNN hasn’t put up the video yet of this segment, but I’ve linked to their blog about it. For those who don’t know, John of God is a Brazilian con artist posing as a faith healer. He does nothing we haven’t seen other “faith healers” who have been exposed as frauds have done, and yet Sanjay Gupta and his guests still found him to be “mysterious.” In fact, given how many times they reminded the audience during this segment that the universe is mysterious and there are still things we don’t know, Gupta made it clear that journalistic and scientific integrity was not very high on his list of priorities. I intend to write to CNN to express my outrage over the segment and demand that they fire Sanjay Gupta for his anti-intellectual nonsense. I hope others will join me in this campaign.