News From Around The Blogosphere 8.23.10

1. First Hitch, and now PZ? – First Christopher Hitchens gets cancer. And now PZ Myers has some sort of heart condition. My best wishes go out to him and hope his treatment goes well.

2. Alligators in NYC sewers? Urban myth confirmed – Though to be fair, it wasn’t a very big alligator:

Cops apprehended an 18-inch gator that crawled out of an overflowing Astoria storm drain and hunkered down beneath a parked car this afternoon, delighting onlookers and giving fresh meat to the urban myth that the carnivorous critters are living below the Big Apple.

Here’s a look at Conservapedia’s featured article of the day:

As far as I can tell this is describing something that has never happened and yet it’s quite blatantly suggesting that is what we should expect to see happen regularly when atheists attack Christianity. This goes so far beyond the bounds of acceptable discourse, it blows my mind. This is exactly the kind of psychotic behavior so easily justified in the name of religion.

That Ray Bradbury is dead sexy 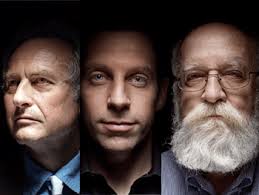 News From Around The Blogosphere 8.10.10

1. Einsteinian physics an evil liberal plot? – That is according to Andy Schlafly of Conservapædia. I suspect this is all part of a Jewish plot. Step 1: Kill Jesus and save the world. Step 2: Fool otherwise good Christians into accepting demonic Relativity. Step 4:  Profit. Muhahaha!

2. Anne Rice’s departure from the Catholic Church may signal the beginning of the end – Former Christian William Lobdell looks at the statistics and it’s looking more and more like Anne Rice is just part of a growing number of Christians growing disillusioned with organized religion.

3. Wiccans offer low, low price for booty-enhancement spell casting – Now I know there’s no such thing as magic, but for only $8.95, how can I afford not to pay someone to chant magic spells to increase the size of my ass. This one is full of win.I just don’t want to know where the magic wand goes.

4. Thought-controlled artificial arm reaches human testing phase – DARPA may have successfully produced an artificial arm as good as the one Anakin had in the Star Wars prequels.

5. Another Catholic child abuse case determined to be ‘credible’ –

A review board for the Catholic Diocese of Pittsburgh has found allegations of child sexual abuse against the Rev. David Dzermejko “credible,” and Bishop David Zubik has sent the case to Rome.

Vatican officials will decide if he should have a church trial or if the evidence is strong enough to permanently remove him from ministry without further hearings.

Wow, that’s some justice system they got going on there.

Phew! I was worried they’d discovered our connection to SD-6:

Atheists and rationalists of all kinds are often accused of not being charitable. Now I’ve blogged before about how atheists groups dominate Kiva, a site that allows anyone to loan money to those in need but this past week, I’ve seen other great examples of giving among secular humanists.

1, For instance, atheist billionaire Bill Gates this week convinced 40 other billionaires to publicly pledge to give half their fortunes to those less fortunate:

Together with Warren Buffett, their “The Giving Pledge” project nabbed Larry Ellison (founder of Oracle), George Lucas, New York Mayor Michael Bloomberg and Barry Diller from IAC (an internet media company that owns Ask.com, Bloglines, Vimeo, Match.com and others), along with many others.

3. Lastly, and certainly the most controversial of the bunch, atheist Robert W. Wilson has recently given $5,600,000 to the Roman Catholic Archdiocese of New York.

“Most of what the Catholic schools teach are the three Rs,” said Wilson, 83, in a phone interview, referring to reading, writing and arithmetic. “And they do it better than the union-controlled inner-city schools.”

Wilson began making donations to the New York archdiocese in 1997 with a gift of $10,000, and he continued at that level for several years. Then Susan George, executive director of the Inner-City Scholarship Fund, asked him to consider giving more money to the schools. Wilson responded in 2007 with a $22.5 million gift to the archdiocese’s Cardinal’s Scholarship Program. He later saw a need for a better alumni support network.

Now regular readers will know that I’m no fan of Catholic institutions, but I have heard from others that some Catholic schools do actually provide a solid education and I don’t know the detail behind this particular case. Certainly, I’d rather see that money go to New York City public schools but regardless of where I personally would rather see the money go, it’s inspiring to see an unbeliever being so giving, especially to an religious organization in which they don’t even belong.

Now we can’t even use $#*!. William Shatner, the god of all awesomeness, is starring in a new show this fall based on a series of popular tweets called “Shit My Dad Says.” Of course, to appease advertisers and the Religious Right, the TV show version is being officially called $#*! My Dad Says. Now as silly as I find this whole characters instead of letters game given that everyone knows what the symbols mean, what I find even sillier is that now even the character replacement is being deemed unacceptable by The Parents Television Council, who insist the show’s title is indecent and are insisting the show change it’s name.

A popular alternative spelling used by journalists is (Bleep) My Dad Says, at least until next season when some loony conservative figures out what the “bleem” stands for and deems that too to be indecent, at which time they’ll insist the show change it’s name to (Expletive Deleted) My Dad Says. And the season after that, when someone looks up what the word “expletive” means, they’ll want to change the name of the show again.

“Parents really do care about profanity when their kids are watching TV,” said PTC President Tim Winter. “All parents? No, but something like 80 or 90 percent of parents. Putting an expletive in the title of a show is crossing new territory, and we can’t allow that to happen on our watch.”

Winter’s letter to companies asks bluntly: “When you advertise on television, do you want your customers to associate your product with (bleep)?”

His letter uses the expletive, not the word “bleep.” Winter uses the real word 10 times in two pages.

So what does William $#@!ner say about the controversy?

“I’ve got grandchildren. I brought up three girls. They’ve all got kids. OK? And you say, ‘Boopy-doo-doo, you’ve got to make poo-poo. Come on. Make poo-poo in the toilet.’ Eventually, poo-poo becomes (bleep). ‘Go take a (bleep), you’ll feel better.’ You say that to your kids. The word (bleep) is around us. It isn’t a terrible term. It’s a natural function. Why are we pussyfooting?”

I have my own message for the Parents Television Council: