According to University of Michigan biologist Barry OConnor, Skepacabra’s less skeptical cousin, the chupacabra is just a coyote with sarcoptic mange (a.k.a. scabies). He bases this conclusion on photos of the corpes of alleged chupacabras, which he says tend show them to be shriveled, hairless, and canine-looking.

Well sure, if you look at the evidence, that might make sense. But isn’t it more fun to just imagine chupacabras are real? I mean with evidence you can disprove anything: leprechauns, unicorns, dragons, space aliens, Big Foot, Man Bear Pig…

News From Around The Blogosphere 7.14.10

1. Atheist group provides one page guide to becoming psychic – When the Humanist Association of Ottawa heard about a local event called “The Psychic Experience” where an alleged “psychic” named Matthew Stapley was to be performing the classic John Edward-like “talking to the dead” routine, they decided to take action. They went to the event and passed out a very simple 1-page pamphlet entitled “How To Be A Psychic” (PDF here), where they explain the most common Cold Reading techniques. And it’s great that they made it available online for others to use.

2. My less skeptical cousin Chupacabra turns up again – Yeah, it’s got to be him because they describe him as being very ugly. And yeah, he always was the ugly one in the family. And he’s definitely not sexy:

Legend states that the beast would attack goats and suck their blood. Think of them as a less sexy version of “Twilight”‘s infamous vampire Edward Cullen.

Yeah, I always though Chupacabra would be more popular if he sparkled in sunlight.

3. Cracked.com hits another one out of the park – I love Cracked.com. They have some of the funniest and most informative articles around. And these days they tend to mostly produce very good skeptical content. And this lasted list from them is no exception, The 6 Most Misguided Causes Ever Made Famous by Celebrities. I’m particularly happy with the number one choice, Jenny McCarthy.

News From Around The Blogosphere 2.6.10 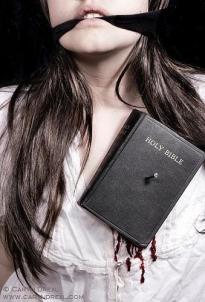 1. Turkish Family buries 16-year-old daughter for talking to boys – Ha! Let’s see her talk to boys now! Way to go! You really showed her. What an incredibly appropriate punishment for your daughter who’s only crime was talking to people of her own age who happened to be of the opposite sex. Praise the Lord! Yes, I’m being ironic.

3. Rush Limbaugh touts creationist beliefs and climate change denialism – I know. I know. BIG SURPRISE! But what’s interesting is that he’s tied them together with a thin piece of fabric, proclaiming that “God” simply would not give his creations the power to destroy the world. Ha!  Checkmate scientists!

The call comes after the Ryan Report in the Irish Republic which uncovered decades of institutional abuse.

Oh Catholics! If only you could use your power for good instead of pure fuckin’ evil. Again, I’m sure if any other organization like Starbucks or Nike was responsible for the institutionalize rape of thousands of child, people would continue to support them too.

News From Around The Blogosphere 1.15.10

Amherst, New York—In response to Haitian residents’ emergency needs following the Jan. 12 earthquake, the Center for Inquiry’s Skeptics and Humanist Aid and Relief Effort (S.H.A.R.E.) has raised $47,000 in less than 24 hours. Those who live without God or religion, along with faith groups, recognize the need to assist the stricken nation’s survivors and have answered the call.

2. Yay, a Chupacabra sighting! – My less skeptical cousin Chupacabra has shown himself again in Horizon City, Texas. That’s right. He’s crossed the border and is now stealing jobs from U.S. fictional creatures. And if you thought Big Foot was scary before, just see what he’s like when he’s out of work. Not pretty.

The ruling upholds a decision by the city’s board of elections, which has twice rejected plans by an anti-gay marriage group to hold a referendum on the subject. City council passed an ordinance in December that allowed gay marriage in the District.

Opponents of gay marriage say they will appeal the decision to the D.C. Court of Appeals. The decision fits a pattern of judicial activism, which has interfered with the people’s will to ban gay marriage, they say.

Um, good luck with that. You know, that’s not how the Appeals process works. You can’t just appeal a decision because you didn’t like it. You actually have to show a legal error was made.

1. Pregnant women develop empathic superpower? – A new study suggests that pregnant women may have developed a heightened ability to recognise threatening or aggressive faces, which may have evolved to ensure hyper-vigilance in mothers to be. The down side is that it may also make them more vulnerable to anxiety.

2. There’s an app for that – The Emotional Brain Training app provides users with a brain-based emotional response training method that allegedly teaches people how to effectively process stress to reduce it to healthy levels.

Why is this awesome?

According to the American Medical Association, stress is a factor in over 75% of sickness and the World Health Organization has stated that stress is America’s number one health problem.

3. Big Foot spotted in Minnesota – I suspect that careful analysis will prove this is just PZ Myers after having been expelled from a screening of another idiotic creationist film. Either that or any other adult male on Earth walking through the forest at night.

4. New York City Atheists reach out to Spanish-speaking communities – How is it possible that Hemant Mehta scooped me on a story in my own neighborhood? Damn you, Mehta!! Ken Bronstein and company have started to have services (not sure what they mean by services) in Spanish to cater to Spanish speakers. So far attendence is small but the mailing list is growing, suggesting that that may soon change. Great idea, guys.

In this holiday season,
let us remember that
kindness, charity and
goodwill transcend
belief, creed or religion.

And might I say, this is far, far superior to the one put up by the FFRF last year. It’s not divisive but rather is positive and inclusive. It’s exactly the kind of sentiment we should be promoting. Kuddos!

6. D.C. council ignores Catholic ultimatum and votes YES on Marriage Equality – Despite the threats by Catholic-funded charities in the nation’s capital to pull their aid should D.C. vote in favor of same-sex marriage, the D.C. council voted 11-2 in favor of marriage equality.

Council member and former Washington mayor Marion Barry ran down his longtime support of LGBT rights before casting a no vote on the marriage bill, saying, “I’m not voting not against the LGBT community, I’m voting no against this particular act.”

Barry says he supports domestic partnerships and will continue to stand behind LGBT citizens, but says it was a difficult “decision of conscience” that led him to disagree.

The world has yet to hear a legitimate moral argument against marriage equality.

7. Actor Sam Elliott blames the Catholic Church for sinking Hollywood’s plans to complete the His Dark Materials trilogy on the big screen – Why this is news is beyond me. I think everyone already suspected as much. As Sam Elliott points out, the film made an incredible $380 million at the box office internationally and only suffered in the ultra-religious U.S., making a mere $85 million domestically. The total gross is plenty to justify completely the trilogy, only New Line seems to have gotten scared off by the likes of Bill “I love child rapists” Donohue and other fanatical Catholic voices.

Nwanaokwo Edet was one of an increasing number of children in Africa accused of witchcraft by pastors and then tortured or killed, often by family members. Pastors were involved in half of 200 cases of “witch children” reviewed by the AP, and 13 churches were named in the case files.

2. New online game for radical right-wingnuts – The game takes place in 2011 after “Obama’s coup fails.” The game invokes the “New World Order” conspiracy and rewrites history, establishing Lou Dobbs as the “one brave newscaster” who first sounded the alarm bells of the evil Obama/NWO conspiracy and defining the Obama administration as engaging in “Marxist experiments.” Really, guys?  On the plus side though, in this hypothetical future history, all the really annoying right-wingnut propagandists like Glenn Beck, Neil Boortz, Rush Limbaugh, Michelle Malkin, Bill O’Reilly, and Sean Hannity have all either been killed or have disappeared. So the future is looking brighter. . .

Well this time they’re totally serious! It turns out I guess that they didn’t carry the one or something because now the world’s going to end on October 21, 2009. And you know this time they’ve got it right because they’ve got such a great track record for predicting these apocalypes.

Like before, I recommend screen capturing this page again, so that you can compare it to what it says on October 22, 2009.

4. My less skeptical cousin chupacabra found and is on display at Creation “Museum” –

5. Dad performs son’s circumcision. . .and botches it – Man, and you thought your father embarrassed you? He probably should have known better since he’d already botched his own circumcision.

The latest Google feature seems to be finding mythological monsters. Using Google Earth, a security guard found what he thinks is. . .wait for it. . .the Lock Ness Monster.

And while most would probably dismiss this as a blob of nothing, Adrian Shine thinks it warrents further study. Of course she also happens to be a researcher from the Loch Ness Project, so methinks she’s a little biased on the matter.

I found this paragraph particularly amusing:

Earlier this year it was reported that climate change may have killed the Loch Ness Monster. There have been “no “credible sightings” of Nessie for over a year.

Of course! Maybe climate change killed Nessie. After all, it killed all the leprechauns and unicorns, didn’t it?

Another episode of blurry, out of focus footage from afar of what could be anything but which we’re to believe is a lake monster

There are clearly only 2 options here. Either it’s some sort of mysterious cryptozoological monster on Lake Champlain. Maybe it’s Chupacabra. I do love me a good Chupacabra sighting.